Quantity exceeds the maximum order quantity. The maximum quantity you may purchase is %quantity%.

Quantity is less than minimum order quantity. The minimum quantity you may purchase is %quantity%.

Drive just an hour south of Walt Disney World and Florida’s scenery changes from concrete skyscrapers and manicured vegetation to mile-after-mile of open grassland, wetlands, lakes and woodlands - home to orange groves and herds of cattle.

“We are five rural counties trying to stay rural,” Layne Lightsey says. “We knew this wasn’t going to be an easy life when we started into it, but nonetheless, it’s the life we’ve chosen. And the bottom line is, farming’s a great life.”

Seventh-generation Florida cattle producer, Lightsey and his brother, Cary, raise cow/calf pairs on more than 34,000 acres. Continuing the family legacy that began in 1858, the men have worked for nearly 50 years to earn a living oﬀ the land, while at the same time preserving the rural Florida landscape for the next generation.

“We want to see some of Florida left in its natural state. We haven’t worked our entire lives caring for this land to have it sold oﬀ to some developer who wants to build
homes on it,” Lightsey says.

Throughout their career, the men have seen the impacts a growing population has on their rural landscape. Since the early 70s, Florida’s population has grown from 7.9 million to nearly 22 million. 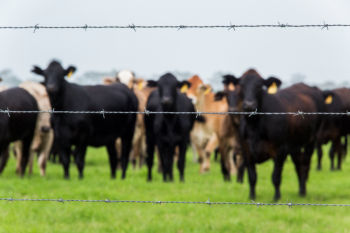 Although their grazing cattle seem to ignore the increased traffic, to keep them safe, the Lightseys have needed to bolster their fencing techniques and management. Where five strands of high-tensile barbed wire before was adequate, today they put up seven strands.

Their fences need to do much more than keep cattle in. “We drive those fence lines daily to make sure a car didn’t run through it. Recently, a car landed on the fence. The wrecker was able to get it oﬀ the fence, and the fence popped right back up,” says Lightsey of Bekaert high-tensile 15.5 gauge Gaucho® High Strength Barbed Wire.

Tensile strength is the resistance of steel or another material to break under pressure. As Lightsey explains, the greater the tensile strength, the smaller the gauge, and lighter the weight, which reduces cost-per-roll, risk of sag and number of fence posts needed to complete the project.

When it comes to fence wire, Lightsey is particular, saying he doesn’t have time to put up cheap wire that won’t last. “We usually replace or put up about 10 to 12 miles of fence each year. And I like a good-looking fence. A fence that rolls out nice and stays tight,” he says. “I’m putting up fence today, so my grandkids won’t have to. I expect the fence I put up today to last 20 years. I don’t think I’ll be around to inspect it, but you never know.” 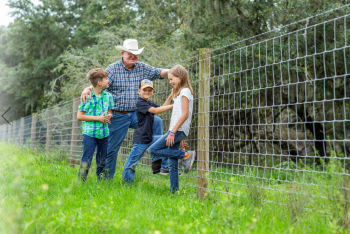 Even at 69, Lightsey insists on driving the posts for the crews he hires each winter to put up fence. In January, he finished putting up an 8-foot high-tensile Solidlock® Pro Game Fence to contain the exotic deer and the zebras he plans to introduce to his game preserve - a side business he started during the Farm Crisis. He explains that building a farm business sustainable for the next generation was no small task.

Although the farm had been in their family for nearly a century, when they took over management after their dad, Doyle Eustic died in 1973, the farm was deep in debt. Lightsey was only 23. Low cattle markets and high interest rates didn’t paint an optimistic picture for the future. “We about starved to death in the 70s.”

To get out of debt, the brothers sold some land, began harvesting grass seed, selling sod and started a hunting business on a 2,000-acre island they owned in Lake
Kissimmee. To this day, the hunting enterprise remains lucrative.

As their livestock operation grew, so did their conservation eﬀorts. Working with Natural Resources Conservation Service and Florida Department of Agriculture, they implement rotational grazing on most of their acres. To improve grassland health and spur species diversity, once cattle have grazed grass to 4-and-a-half-inches, they are rotated into a new pasture. “Moving cattle from one pasture to the next is easy. You open up a gate to where there is better grass and they just pass through.”

With hundreds of pastures under rotational grazing management, Lightsey explains fencing is essential to grazing cattle in such a way that improves the health and sustainability of their grasslands, while at the same time also protecting the fragile wetlands and waterways he also cares for.

“Fencing is a very, very important part of our business. It allows us to control the way the grasses are grown and grazed by our cattle.”

In addition to rotational grazing, Lightsey has worked hard to control Palmetto, an invasive weed that crowds out native species, like wiregrass.

Thanks to their conservation eﬀorts, the grasslands have also responded and Lightsey’s carrying capacity has increased over the years, allowing him to sustainably graze more cattle. Wildlife are also responding to the increase of native grass species. “Now that wiregrass is coming back, we’re seeing a huge resurgence in quail populations.”

The Lightsey’s conservation eﬀorts have not gone unnoticed. In 2019, the Nature Conservancy asked the brothers to take over stewardship of 2,000 acres of native land. In 2016, they received the Green Horizon Land Trust’s Blazing Star Award and in 2009 they were recognized as Sunbelt Expos’ Florida Farmer of the Year.

“Part of stewardship, especially in agriculture, is not done for my generation. It is done for my children and grandchildren. I’m just passing through,” explains Lightsey, who hopes one day his and Cary’s children take over the operation.