Quantity exceeds the maximum order quantity. The maximum quantity you may purchase is %quantity%.

Quantity is less than minimum order quantity. The minimum quantity you may purchase is %quantity%.

When Mike Galloway left his corporate radio job to help his wife’s step dad run his Wyoming ranch, the thought of becoming an internet sensation was the furthest thing from his mind. Yet, ten years and over 150,000 YouTube followers later, his channel Our Wyoming Life, brings gritty and raw ranch life to viewers across the nation.

So, when the possibility of a partnership between Galloway and Bekaert Fencing arose, both parties jumped at the chance.

“Mike and I met at World Ag Expo in Tulare, California. We talked and we hit it oﬀ from the beginning,” says Keith Taylor, Technical Support Manager for Bekaert. A few months after the expo, the two reconnected to see what sort of projects they might be able to work on together.

Galloway told him, “I have about 600 feet of bull fence that I need to replace.” He said that very day, the highway patrol had called him to tell him his bulls had gotten out and were on the road. “It was definitely a safety issue,” he lamented.

Because Galloway keeps his bulls in a five-acre pasture near a busy highway, over time, it had become not only dangerous but a liability. “The bulls had pushed through his low carbon fence over the years and the fence was getting worse and worse. And it was in a low spot so there was water damage and all that kinds of stuﬀ,” he says. 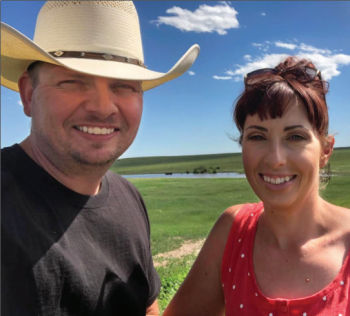 Taylor knew this was a great opportunity to develop the partnership. Galloway says, “Keith told me, he said, ‘I want to come build your fence.’ And I said no, you don’t have to do that, let’s just work out a deal.” But Keith and the Bekaert Fencing team were dedicated to coming together with Galloway. Taylor didn’t waste any time. He left Bekaert’s Van Buren, Arkansas manufacturing facility, and headed north to Gillette, Wyoming.

When he got there, he was all in. Galloway says, “Keith wasn’t afraid to get right into it. The day he showed up, I showed him the fence we were going to replace the next day. And he was ready to go. He was just like, ‘I’ll start tearing this out today’ and I was like, ‘We can work on that together tomorrow.’ But he said ‘you go do what you’re doing and I’ll just get to work on it.’ And he just took the bull by the horns and ran with it.”

“The bulls had just made a mess of it,” says Taylor, so they stripped out all the old wire and the next day, he and Galloway started on the new installation. “The braces were really strong,” says Taylor, so those stayed in place. Taylor helped him put up Bekaert Solidlock® Pro: Professional Strength Fixed Knot 1348-12 fence, a sturdier wire that was able to better stand up against bulls rubbing against it and trying to root under it.

Galloway says he’ll continue to use high tensile wire on future projects, especially due to the simplicity of wire’s installation.

“What probably would have taken me days two or three days, we got it done together in one afternoon.” Galloway also mentions how much valuable information Taylor taught him. “I learned a lot. You don’t see the high tensile stuﬀ out here too much, so there are diﬀerent installation tactics to use. Some of the new tools that Keith was using, like the Gripple wire joiners, that kind of stuﬀ is amazing. It makes things so much easier. Keith was able to show us some quick and easy tricks like how to tighten wire and ways to put up a wire.” 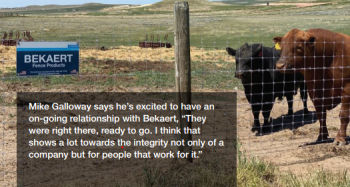 Galloway recorded Taylor’s visit and their fencing project and put it up on his Our Wyoming Life Youtube channel. It wasn’t long before the comment section exploded with excitement. Galloway says, “Even people that had been putting up wire their entire life were like, ‘Why haven’t I been doing that all these years?’”

His audience also spoke to the kind of company Bekaert must be, to be involved with a real-life ranch project. Galloway says, “You can go back and look at some of the comments on those videos, and people are just amazed that Bekaert would send somebody out here. There are tons of comments about how much Keith must be a valued commodity, valued as a person in that company because he’s knowledgeable and he knows what he’s talking about and he’s able to explain it to somebody who may not know much at all about putting up fence.”

With viewers from all over the country, a good portion of them have never set foot on a ranch before. Galloway says, “When I’m making a video about fencing, I have to make that video entertaining for somebody who’s never picked up a pair of fencing pliers before. But Keith was able to translate that and was able to show how everything works and the audience, they loved it.”

Galloway says he’s honored by “the fact that Bekaert has so much faith in us that they’re willing to send somebody here to help me.” He says that he’s excited that the partnership between Our Wyoming Life and Bekaert will be on-going.

“About a week or two after Bekaert was done here,” he says, “we put out a video that was basically about how we’re not going to have any hay this year because we’ve been in a drought. I got a text from Keith that said, ‘Hey, I saw your hay video. What can Bekaert do to help you with rotational grazing? Do you want us to come in and section oﬀ some hay fields so that you can get in and graze them better?’ They were right there, ready to go. I think that shows a lot towards the integrity not only of a company but for people that work for it.”